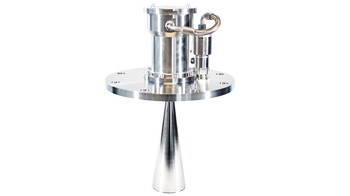 API Marine is a supplier of a full in-house developed range of unique sensors and system for tank control and management operations having delivered integrated solutions to more than 300 new buildings.

API Marine have over the recent years set new standards for tank measuring technology by bringing dedicated and proven measurement technologies of the 21st century into use on tank installations within the marine market.

The new API Marine TANK LEVEL RADAR – TGD-R operates on 26 GHz high-frequency and can measure up to 35m. Furthermore, the antennas and the microprocessor have been optimized for conducting high speed signal analysis, which enables them to be used in very complicated measuring environments such as chemical and product oil cargo tanks.

The new API Marine TANK LEVEL RADAR – TGD-R meets all requirements for marine use in harsh and extreme environments, and together with the API MULTIFUNCTION TGD level gauging device (using acoustic guide low guided frequency technology), API Marine can meet any requirements and applications from the markets of tank management for accurate level measurement.

“The new API Marine TANK LEVEL RADAR – TGD-R is a valuable extension of the API Marine Sensor portfolio, and will further strengthen our position in the chemical and oil tanker market” said Sven Egelund Rasmussen

The API Marine TANK LEVEL RADAR – TGD-R can be delivered as standalone level sensors or as a part of Integrated Cargo Control System.