The vessels are designed by Maritime Projects, Bergen having a loading capacity of 9.500 cbm. Mr. Cao Jianping, General Manager of Zhenjiang Sopo Shipbuilding Co. Ltd. together with Director of Technical Department of O.W.Bunker, Mr. Steffen Kortegaard visited API Marine on Monday 29th of September to confirm the cooperation and to be introduced to the API Marine factory and production facilities in Aalborg, Denmark. 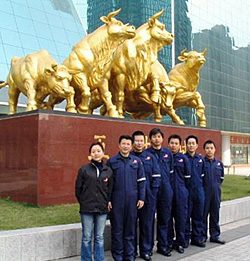 Stable and accurate level gauging – even in case of offshore bunkering, ensured by API patented low frequency guided acoustic wave technology, is not affected by sloshing in the tank. This was recognised as one of the key parameter for the owners to focus on a full integrated package solution under the API Marine brand.

With this contract API Marine is pleased to announce the establishment of a joint technical support team in Shanghai in cooperation and partnership with Singapore-based designer and manufacturer of remote valve control systems – Nordic Flow Control. By joint effort and attractive technology API Marine and Nordic Flow Control will have a strong platform for further expansion of business within the Chinese new building market. Currently several new projects are in the pipeline for supplying and supporting full integrated systems for management of cargo, control, ballast, alarm and remote

valve system in one intergraded package supported by the NFC/API Shanghai based tech team.