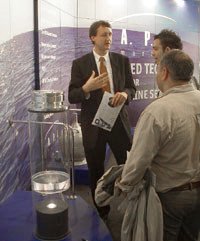 For the 22nd time SMM – shipbuilding, machinery & marine technology, international trade fair Hamburg – gathered exhibitors and visitors from all over the world. Being world’s greatest shipbuilding exhibition, SMM 2006, has set up a new attendance record, attracting more than 45,000 trade visitors.

Once again API Marine was presented at SMM with its range of advanced solutions for level switching and tank gauging. The four successful and busy days resulted in a number of established contacts and high interest in API Marine products from shipowners and shipyard representatives, who accounted for a large proportion of visitors at SMM 2006.

Among usual exhibits the exhibition stand was extended with the latest innovation from API Marine – ultrasonic liquid level switch for cryo tanks, ASL-500 Cryo. This version of ASL-500 is specially designed for accurate and reliable liquid level switching in Cryo tanks containing liquefied gases at temperatures ranging between -250 °C and +300°C.

During the exhibition API Marine held a number of fruitful meetings and discussions with representatives from major shipbuilding and shipping companies of Scandinavia, Germany, South Korea, China, Japan, Russia, Ukraine, Argentina and Brazil. The meetings concerned application of API Marine solutions in future newbuilding projects for tankers and gas carriers.

SMM 2006 not only secured a number of successful contacts for API Marine, but also showed growing industry opportunities for API Marine products worldwide. 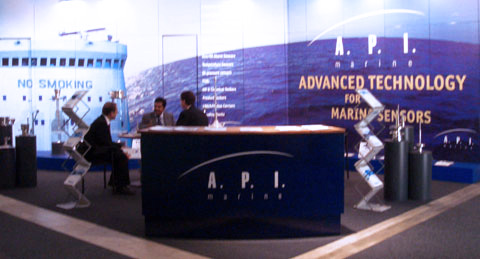